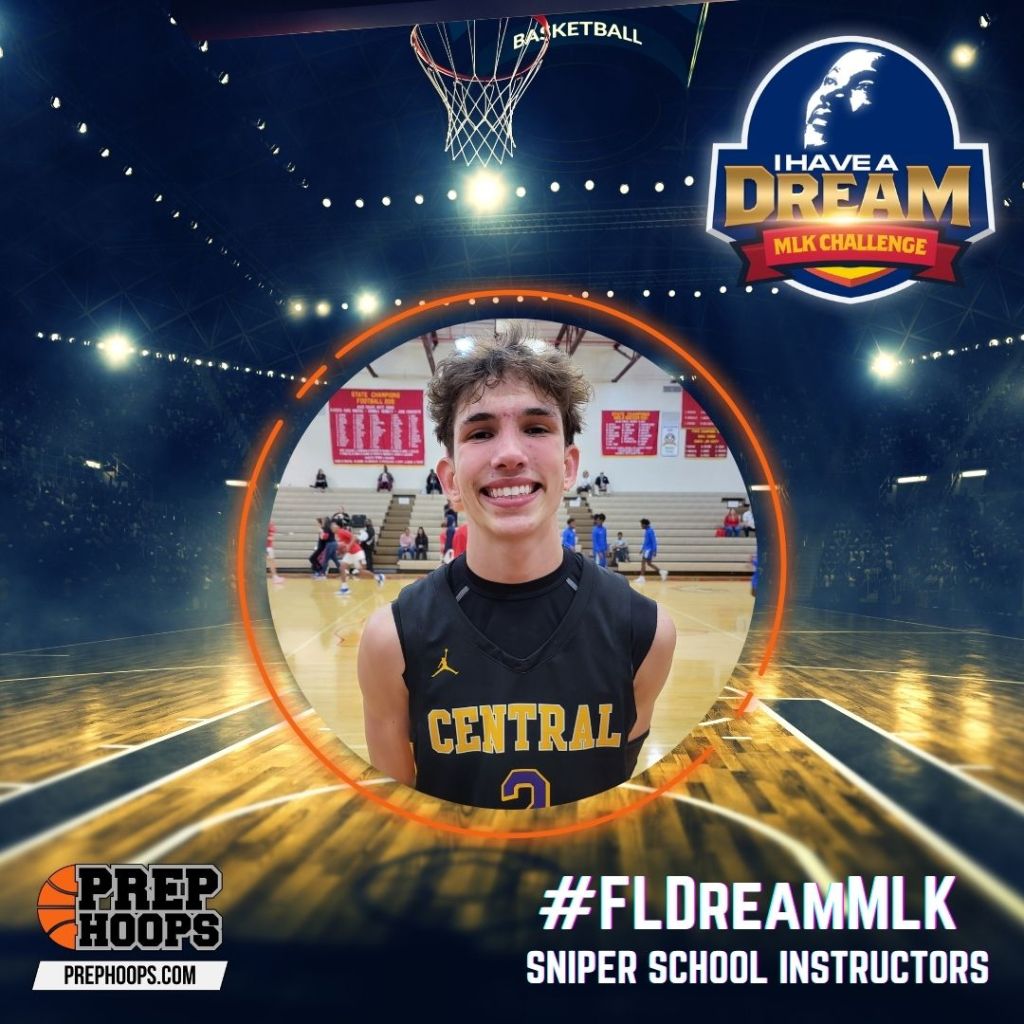 The #FLDreamMLK Classic had a lot of players that could stroke the rock, but the guys in this article did it better than all the rest. To qualify for this article, you had to knock down a minimum of 4…

The #FLDreamMLK Classic had a lot of players that could stroke the rock, but the guys in this article did it better than all the rest. To qualify for this article, you had to knock down a minimum of 4 treys, which was the qualification for becoming an instructor at sniper school. Let me introduce you to the instructors…

Adrian is a shifty guard with handles that can create off the bounce but make no mistake about it; he does his damage in his c&s opportunities. He knocked down 5-3s in a losing effort against Westminster, finishing with 15pts.

Adrian knocked down 5-3s and finished with 15pts.

Cooper was highly productive from behind the arc knocking down 4-3s and finishing with 18pts in a win over St. Thomas-Aquinas. He was lethal in his c&s opportunities.

In my previous article, I wrote about Christopher’s twin regarding standout guard play. I wanted to add Christopher to that article because his guard play was also amongst the best throughout the classic, but I decided to hold off and add Christopher in this article. In a 58-51 win over Blanche-Ely, Chris knocked down 5-3’s, finishing with 15pts. His production extended beyond the arc as he was a creator off the bounce, as he set up his teammates for open and easy scoring opportunities. His points from behind the arc were timely buckets throughout the game that ultimately changed momentum down the stretch. Chris is a shooting guard who can stroke the 3pt shot, has excellent shooting form, and is a solid athlete. His trajectory is off the charts, and I am looking forward to the remainder of his season and his spring and summer play.

Brandon knocked down 5-3’s, finishing with 21pts, in a losing effort to Coral Springs. He did an excellent job in the scoring column, which kept the game close and gave his squad a chance late. He is a multi-level scorer that made the most of his c&s opportunities. He is a hard-playing dude that warrants constant monitoring the rest of the season to see if a fit at the next level can be found.

In an 82-60 win over Calvary Christian, Victor knocked down 4-3’s and finished with 23pts. He is a score-first PG that scores off the bounce in transition and in the half-court. He is a physical guard that finishes well thru contact and battles on the boards. He scores from behind the arc off the bounce and in c&s opportunities. He has the ball in his hands a lot, and he makes sure that DSA gets quality possessions on offense.

Victor knocked down 4-3’s and finished with 23pts.

In a 64-72 loss to Miami Palmetto, Ryan knocked down 4-3’s and finished with 17pts. He was very efficient in his scoring from beyond the arc and at the line. His game off the bounce draws fouls as he puts tremendous pressure on the defense when attacking downhill. When defenders had to respect his game off the bounce, he took what they gave him and showed his ability to score from deep.

Ryan knocked down 4-3’s and finished with 17pts

Ayden is a young PG that has already stepped in and shown reliability and trustworthiness at the lead guard spot. He can run the show and go for huge numbers and is already an emerging prospect for college coaches to put their eyes on. In the win against St. Brendan, he knocked down 4-3’s and finished with 14pts. Everything that Ayden does contributes to winning, and I like what Ayden is bringing to the floor in the next few years.

Ayden knocked down 4-3’s and finished with 14pts