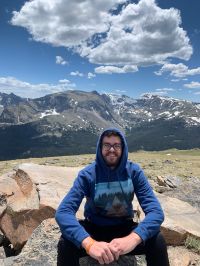 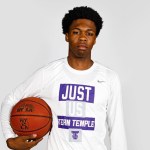 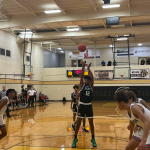 Peyton is a special prospect who has really taken a massive leap over the last year, really honing in on the defensive side of the ball and showing off his explosive athleticism and how easily he is able to turn defense into offense. His length allows him to defend all positions on the floor and his foot speed allows him to harass high level guards in the full court. His ability to defend the best players on the court and seemingly tale them away really allowed his defense to take advantage of relaxing a bit more on the defensive end. It allowed his center to stay back in the paint and everyone else just deny the ball when he was on the court. He is a strong trapper of the basketball who uses his ability to seemingly swallow up his opponents by his harassing nature on the ball. He has really grown as a set shooter from beyond the arc, but also is showing enough patience to pull up in the mid-range and take what the defense gave him within the half court. Gusters has really worked on when to pick his spots, but do not get in his way on the fast break or you will end up in a body bag (SEE BELOW)!

Corey was on one at the RCS Sports Season opener, scoring at will from beyond the arc and punishing his on ball defender with an array of crossovers. He naturally created space and separation with his handle, showing off his high level scoring ability from beyond the arc. He finished with 33 points against a guard deep team at the RCS Sports Season Opener, getting to the rim at will and taking on a match-up against another high level Houston guard personally. His aggressiveness is always on display when he touches the court, relentlessly going through his opponent’s chest on his way to the rim. More importantly his demeanor never stops when he is looking to push the lead out of reach of his opponents. His awareness to know that he cannot let up for a split second allows him and his team to find success as he closes out games single handily. His ability to put the ball in the basket is already at an extremely high level, and his demeanor and intensity that he plays the game with is a true example of his readiness for the next level.

The Kansas commit was dominant once again as he took the hard wood, scoring at will from beyond the arc. He danced around his opponents with high level crossovers and showed an ability to create separation against anyone with his handle. I am always in awe of how easily he makes it look, pulling up in the mid-range and scoring off the bounce at will from the three point line with an array of side step threes and step backs. He is a ferocious finisher when he wants to put his head down and get to the rim, scoring effortlessly over bigger defenders; using floaters and up and under’s to manipulate them out of his way. Where I have seen the most growth from him in the last year has to be his work defensively, sliding his feet and keeping anyone in front of him. He is a willing rim protector from the help side and can protect the rim in one on one situations as well. If you are in the Houston area, McDowell is MUST SEE TV! Tune in this year before you miss out on an opportunity to see a high level athlete at work!

The TCU commit showed off his ability to effortlessly score at the rim, showing off his jaw dropping athleticism as he floats to the rim. His ability to finish through contact as he is eye level with the rim is an absolute weapon for him, and it allows him to finish with ferocity or grace depending on the situation. He has dramatically improved his scoring prowess over the last two years, adding a mid-post game paired well with his ability to rise up and score off the bounce. I am really impressed with his patience that he displayed this year, calmly operating and manipulating the defense with his handle but also his subtle body movements. His ability to naturally score across all three levels is very special to watch, so get out an see him before it is too late! Posey is an absolutely special athlete who is sure to put on a show at the next level right away.